Book Review: Each of Us a Desert by Mark Oshiro 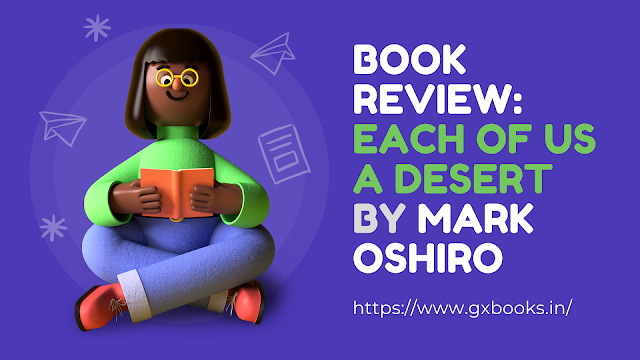 Each of Us a Desert by Mark Oshiro Book Review

Book review of Each of Us a Desert by Mark Oshiro: I'm making this video as part of the Each of Us a Desert book tour hosted bicolored Pages. Honestly, I'm so happy I got the chance to participate in this book tour. I never actually thought that I would be accepted into the book tour, but my little Latinx queer heart is so so happy because I loved reading this book. And I'm so happy to have the chance to rave about it. For more information about this book tour, I will leave links down below in the description so you can watch other videos and read other reviews that people made as part of this book tour. In this book, we follow our main character Xo who is travelling across the desert in order to understand what it means to her to be a scientist.

A scientist is someone who takes in the stories of the people of her town and returns them in ritual to the sun god Solis. Since Xo was given this role at a very young age, she struggles with it. She'snot sure she wants to keep being her town's scientists. So, she travels across the desert and starts to learn that there's more to being scientists than she first thought, and there's more to the god Solisthan she first thought as well. I rated this book four stars. I really really really enjoyed it. One of the things that I enjoyed about it was actually a part of it that I wasn't expecting to be a huge fan of, and I wasn't anticipating when I picked up this book. Cause, honestly, I picked up this book without knowing much of anything about it. Just knowing that I really really wanted to read it. But one of the big things about this book, at least for me, is that it's a narrative about faith. It's about questioning faith. It's about wondering what your role is, what your god's role is, what is the connection between the two of you. Is there a god? How much does this god care about you? What does it mean to believe in a god but feel like you have been abandoned by them? So, honestly, I was blown away by that aspect of this novel. I was so blown away by it. I honestly really really related to Xo's journey with that.

Although obviously, there's a more magical element to her connection with her god Solis, because she's a cuentista, I definitely still related to her journey and her struggle with her faith. You can't talk about Each of Us a Desert without talking about the connection Xo has or doesn't feel like she has with the god Solis. Another thing that I liked about the story, but not perfectly, was the "romance." I put it in scare quotes because it's not like a swooping romance. You're not gonna be blown away by it.At least, I wasn't. And I think a large part of that is because it's not really central to the story. The relationship that and Emilia develop yes it's important to the narrative, but not as a romance in itself. That comes much much later. And so I think that's kind of why the romance element is more in scare quotes for me. Because I don't really think their relationship the main point of it was to get you to swoon over their romance. I don't think that was the point. I think really this story is about two girls who are lonely, who feel like people don't understand them, who are looking for companionship, for someone who understands where they're coming from, why they feel the way that they do.

And so that's how they're brought together. And that's how they start getting to know each other and feel this connection between each other. So, yeah. As a connection between two people, I really really enjoyed their dynamic. But as aromance, I wasn't really that into it. I needed a little bit moreto be more invested in the romance. Something else that meant a lot to mewhile reading this book was the use of Spanish.Honestly, the author did this so seamlessly,so well, that I just found myself smiling just seeing a book that sounapologetically uses Spanish. Because the author really doesn't try to holdyour hand, doesn't try to be like "oh this means this thing or thismeans this other thing." It's really very much like,"figure it out because I'm not going to tell you what [everything] means." And at least forme, that's very valuable and that's very meaningful.Because although I understand the role and the point of books thatdo kind of like hold your hand a little bit more with the stuff that you'reunfamiliar with, I also very much respect stories thatare like, "nah, man. you want to figure it out? figure it out. because I'm not goingto tell you."

Finally, the other thing that I likedabout this book was its discussion about storytelling. It's very muchcentered on the stories we tell ourselves, the stories we tell others.It's about how sometimes we demand people to holdvery emotional things for us, but then we don'treturn the favor, as it were. We only give so much emotional baggage to otherpeople, and then we don't want to have any ofthat baggage from that other person.  I thought it was handledreally really well. So, yeah. I would definitely definitely recommend pickingup Each of Us at Desert. I really really loved it.I love reading books that center on characters where you really get to knowa character. So, if that's your jam, totally check thisbook out. Now it's time for me to share my five book recommendations based on each of Us a Desert. The first book I'm recommending is WeSet the Dark on Fire by Tehlor Kay Mejia. In this book we're following twogirls that go to like this private schoolwhere they train to be wives. Because in this worldmen of influence get to have two wives. One of these wives is supposed to bemore intellectual, is supposed to help him run his house, run his business, make decisions.

And the other wife is the one that takes care of children.She's the homemaker. She makes sure that the house is very welcoming and stufflike that. And so in this book we're followingthese two girls who are chosen to be the wives of the sonof one of the men who's in power in this world. But what happens is that the twoof them start to fall in love with each other,and maybe even work with the revolution that is trying to make sure that thepoor people, those who cannot afford to have twowives and live the fancy lives that the peoplein power do, get to have better lives and get to havethe resources that are being hogged by the people in power.I'm recommending this book mostly because of thesapphic rivals-to-lovers. If you're looking for another sapphic romance, andyou're especially looking for another romance that hasrivals-to-lovers----cause it's not quite enemies-to-lovers. I  wouldn't call it asintensive as that---but if you're looking for another one thenthis is one that I would highly highly recommend you pick up. Iabsolutely loved Dani and Carmen, so please try this one out if you werelooking for that vibe. The other book I'm recommending isactually a manga. It's called The Girl from the Other Side by Nagabe. Idon't really know how to describe this manga. It's about this little girl wholives in this world where they're kind of scared of these creatures because they're "infectious."

And when you get this infection, youbecome basically a monster. And so, it's strange. [laughs]  I honestlydon't know how to describe it. But the main reason I am recommending this mangais because I feel similar vibes between The Girlfrom the Other Side and Each of Us a Desert. Especially becauseEach of Us a Desert has really creepy and goryand unnerving moments, and The Girl from the Other Side has that same thing.It's a mix of having these very intense haunting moments while at the same timehaving very wholesome and cute interactions.So, I think that's why The Girl from the Other Side works if youliked Each of Us at Desert because you'll get some intensity while at thesame time getting the relief of you're following a little girl andshe's forming a bond with one of these monsters.The next book I'm recommending is On Earth We're Briefly Gorgeous by OceanVuong. This is a literary novel where we followour main character who's writing a long letter to his mother who can't even readEnglish. And in this letter he tells her everything he hasn't told her before. He talks about his queer experience. Hetalks about what it has meant to him to learn thingsabout the past of his family---of his familial trauma---and other things.

And so I'm recommending this book if you're looking for another character study. If you're looking for another book where you canget really really into the mind of a character and how they feel and how they see theworld, I think this novel will definitely work for you.It's very introspective. It's very beautifully written.And it's also super super sad. So, if you're kind of looking for something like that give this a shot. The next book I'm recommending isCantoras by Carolina de Robertis. In this book we're following five queerwomen who live in 1977 Uruguay. And we follow themacross several years as they struggle with what it means to be queer,how to be queer, and how to find happiness while living under the Uruguayan dictatorship of the time.This one I'm recommending if, once again, you're looking for anothercharacter-driven story that has very very little plot where you're justmainly focusing on characters and their relationships with one another.I would highly recommend this one. The last book I'm recommending is The Weight of the Stars by K. Ancrum. In this book, we're following our main character who really wants to be an astronaut. And it's about the therivals-to-lovers romance that develops between her and another girl whose mother has gone into space but is probably never going to return to earth. This one I'm recommending because of thesapphic rivals-to-lovers. Again, if you're looking for more of that sapphic energy that is more antagonistic, I would highly recommend picking up this book. Anyway.