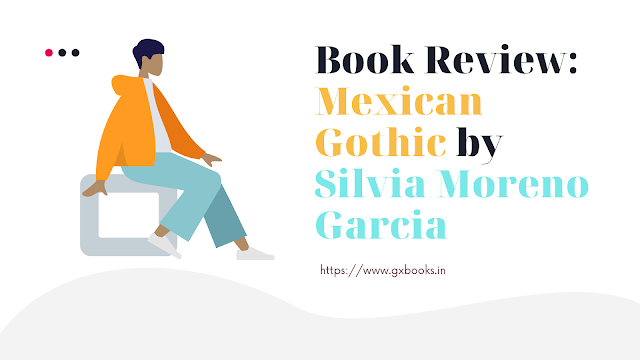 Mexican Gothic by SilviaMoreno Garcia. Hope y'all enjoy it! So Silvia Moreno Garcia is one of those authors for me that is an auto-buy. I will literally buy anything she writes, I think the way she kinda does hybrid mixes of genre and changes them and makes them really unique to her own writing style is the best thing ever. Mexican Gothic is no exception. Mexican Gothic is a classic reimagining -- sorry! Mexican Gothic is a reimagining of the classic gothic novel. So if you go way back in time, when you think of the first "gothic novel", I guess you can think of the castle of Otranto. Otranto? The Otranto book is what I call it.But there this spooky home, weird things are happening, ghosts and you get all those elements ( spaces out for like two seconds)in Mexican Gothic. So, this book is about a young socialite calledNoemi.

Noemi is just a party girl, she loves to live her life, she likes being free. She likes to party, drinking, all that kinda fun stuff and she wants to go to grad school for anthropology, I believe. She has a cousin, her cousin sends her this very mysterious letter one day asking her ( Noemi) to save her.So her cousin marries this wealthy white guy and he whisks her away to this mansion, this gothic mansion called the High Place. She ( Noemi) hasn't really spoken much withher cousin since that initial marriage. But she is alarmed at the tone of urgency-- the urgent tone that her cousin writes her. Noemi cuts a deal with her dad, she's like"fine dad I'll go and check up on my cousin, if you can let me just -- go and fuck offto grad school basically. And her dad's like "Sure, yeah , go ahead." So she goes to High Place and is immediatelycreeped out and I would be too! It's basically like this British style colonialhome in the middle of Mexico. It's based on a real town called in Hidalgo,Mexico called Mineral del Monte or Real Del Monte. It's a small mining town in east central Mexico. So immediately she is kinda thrown off andshe is immediately suspicious but she meets this guy who turns out to be her cousin'shusband's nephew.You can tell that there is gonna be some kinda tension between them andthere is gonna be something more. She goes to the main house and meets everyoneone blah blah blah. She meets her cousin's husband called Virgil,and he's supposed to be this very handsome guy. In my mind he looks like Dan Stevens in Downton Abbey, but I was talking to some people and they were imagining Armie Hammer.But likebasically, that type of very basic white man face, that is what he looks like. So she's thrown off at just the oddity ofit all and she sees's her cousin and she almost doesn't recognize her. She's not the same girl that she once was. It's almost like this house is taking theenergy from within her.

Noemi immediately sets out to solve the puzzleand find out what is happening in the house because it is weird as hell. There's definitely, a very atmospheric qualityto the book and I think alot of her writing itself in alot of books that she's written,really capture the feeling of the setting and she does it once again here. It's feels like rotting in decadence, is theway I would describe it. So very kinda traditionally gothic in thatway. My mind kept going to Crimson Peak by GuillermoDel Toro, if you've seen the movie.But the house, really reminded me of that, especiallynear the end when certain events happen and the horror factor gets ... expanded on.Ifyou're somebody that gets scared easily, maybe don't watch read this at night, because thereis certain imagery in this book that will have you.... questioning things... So while in High Place, Noemi starts gettingthese really weird, vivid, dreams that are just really unsettling. Honestly trigger warning for sexual assaultwithin these dreams because as a reader yourself, you can't even distinguish what is a dreamand what is actually happening because the house itself just has this really like ... worldwithin a world feel to it.So you don't really know what's happening really, until the veryend.I've always admired the way Silvia, creates a very delicate balance between tension andplot within her novels and in Mexican Gothic it is no exception.

The way the second act kinda leads into thethird and everything is kinda revealed to me was so satisfying to read. One of my favorite things that she does iswrite really good, complex, female characters and protagonists. I love how layered they are. For example, you have Noemi, who is this rebelliousgirl and you have her cousin, Catalina who is portrayed to be a little bit more timidand reserved but those aren't the only facets that they hold. Their only role in the story is not just tobe the swashbuckling savior or the damsel in distress, they really own up to certainmoments and show the complexities behind their characters. One of the creepiest aspects of this bookis the way that colonialism and eugenics comes into play. Without spoiling too much of it , it reallyexplores the dynamics of when European settlers invade a place that isn't theirs and try tochange it from the inside out on a really slow burn. So slow and so subtle and so gas light-y thatthe people being affected almost don't perceive or see it. We see that personified in this relationshipbetween the original inhabitants of High Place vs Noemi and Catalina, the new blood thatis introduced. I really do think that this book makes reallyinteresting commentary on the fetishization that white men sometimes have with communitiesof color and how the "intrigue" some people have with these communities is entirely basedon their perceived "inferiority" and "exotic-ness" and I think Silvia did a really great jobat kinda untangling that and writing it in a way that is so unsettling and so creepybut entirely true because it is just an example of what actually happens in reality.

I think that the way these aspects are unraveledwithin the novel is what really cements it as a true horror book. I've seen alot of discourse online like onbookstagram and stuff about how some reviewers were saying that this book wasn't necessarilyin the horror genre or Mexican enough and I entirely disagree because that's one ofthe reasons why it's so terrifying. These people of color ( BIPOC) and their bodiesare being exploited for white gain and then disposed of like they're nothing.And that'sthe reality so many people face and continue to face. So some quick things on this book -- Thisfamily is composed of the dad figure, Howard, he is a literal creep.Virgil, again creep. Francis, he was going down into the creeproute but he didn't entirely reach it and Florence who is the (Howard's) niece. Now when we talk about like passed down, cyclical,toxic traits....this family is that personified. They are a unit and are really close in moreone way and there are mushrooms involved... that's all I'm gonna say.To make a long storyshort -- this is just a great gothic book that takes place in 1950's Mexico that dealswith race, with paranormal elements, with toxic masculinity and toxic families and justhow all those things go deeper then you may think and how roots of not only families butof beliefs can rot the entire area beside it. Like there is that one saying "One bad apple"ok imagine that but they're all bad apples.

And really quick, I just wanna say thanks to DelRey, the publisher, who gifted me this ARC after I literally slid into their DM's andwas like "Can I have it?" and they were like "Sure". So throw your shot. But yeah that's Mexican Gothic, I really likedit.Silvia Moreno Garcia's writing style is interesting to me and I really love it becauseit is both blunt and powerful but also very poetic. And I know that doesn't make sense but I feellike once you read a book of hers you'll understand exactly what I mean.Some people are a littlethrown off because of that, it's not necessarily as flowery or like long and flowy as somemay enjoy within the genres that she usually writes in. So like fantasy, historical fiction, herein horror, noir, so watch out for that if that's not something that you enjoy. But I really enjoyed this book and I hopey'all give it a chance. I always talk about SMG because I love herand I think she is criminally underrated not on ly on booktube but on bookstagram and booktwitter and at like the world at large . I think her novels should be adapted into movies,tv series, I don't know. Here's a graphic of me making a fake Netflixscreen because I love it so much.