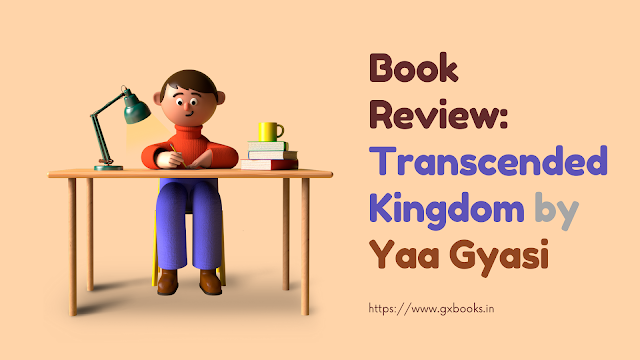 transcended kingdom by Yaa Gyasi: This is the second book from yaa gas that she's published. Her debut novel was homegoing, which is one of my all-time favorite books. And I was very excited to see that she had a new book coming out. If for some reason you are watching this and you haven't read homegoing yet, just go pick that up. That is a book that I can give a sort of as a blanket recommendation to literally anyone in the world. So this book follows gifty whois of Ghanian descent. She is at Stanford medical school and she is working on her Ph.D. And she's studying sort of the neurological impacts of depression and addiction. And this research is directly related to her own life and history. Her mother suffers from depression and her brother died of a drug overdose when he was in like high school. So that's basically like all you need to know about this book, generally, in terms of like plot and synopsis. This isn't a heavy plotted book. So I will say just sort of off the bat with just giving that like verybrief synopsis that this book is wholly different from homegoing.

That is not meant to be a negative or positive statement. That isjust what it is. And so if you go into this book wanting another homegoing, you will be disappointed, 1000%. But if you are willing to take this book for what it is, then i think you will thoroughly enjoy this book. So i will admit that like formyself when I first picked this book up, it took me a minute uh to reallyacclimate myself to what was actually happening in this book and to kind of ignore homegoing almost and to justsee this book for what it was and then to fully like fall in love with it. So if it wasn't clear, i love this book. This book feelsmore literary than homegoing. Homegoing feels very commercial. And like i said atthe beginning, homegoing is a book that i would recommend to basically anyone who came to me looking for bookrecommendations. To that point, literally everyone in my life who hasasked me for book recommendations in the past like five years or whatever has probably heard me talk about homegoing. This is not necessarilythe same thing. So like this is a book that i wouldrecommend to people if they have more like literaryinclinations to their reading. So if you're someone who's like brand new to reading um or is getting back into reading afterbeing away from it for a while, i feel like homegoinghas a more like commercial and plot-driven-ness to itcompared to this book.

This book is significantly slower,a lot more like thoughtful and thought-provoking.Which again those aren't meant to be like positive or negativeattributes to either book, they just are their own thing and so they're going toappeal to people in different ways. The way this book is writtenis from a first person perspective. So gifty is telling youthe story about her life and her research and why she's doing what she'sdoing and things that have happened in her life and things along those lines.And so there's a part of this book that has a very likememoir-esque feel to it. There were points when i wasreading this book where i was just like very overcome with the fact that like ifyou had handed me this book without like a title or author anythinglike that and told me it was a memoir, i 100% would have believed it because it feels like a memoir in many ways because giftyis basically reflecting on her life and her career and her family history tokind of figure out like why she is where she's at and the thingsthat she feels and the choices that she's made over the courseof her life and how her history impacts all of that, or influences all ofthat i should say. So there's a lot of this book that isjust sort of like ruminating on the experiments that gifty is doing and her then sort of thinking about the factthat like her experiences with her family, with hermother falling into deep depressions and her brother gettingaddicted to oxycontin and then leading to harder drugs beforeoverdosing, how she's hoping to find some sort of hope in science inorder to kind of explain those things away. And there's a part ofher that wants to almost be able to fix these thingsfor other people so they don't have to go through the things that shehad to go through growing up.

And even though these events happened to her whenshe was like relatively young, even though she's likean adult now getting her phd, you can tell she's still grieving theloss of her family. There's a point in this book where she talks about the factthat like basically all that's left of her familyis her and her mother. And her mother like basically falls intoa deep depression again at the beginning of the book and giftyis reflecting on the fact that like if she doesn't help her momand get her to like eat and take care of herself and stuff like that thenit's just gonna be her. And the sort of grief of that, in and of itself, is like so sad and moving and things like that butsort of this reality that this character has tofigure out and come into contact with and things like that. There's also justlike a lot of things in here that just felt so honest and poignant and things that like personally i feel likearen't talked about very much.

Like just like these little quiet scenes that like happen in real life but you don't reallysee reflected in fiction. So one of the things is thistension that gifty feels about talking about her family and her past,partially because she's been through so much and partially also becauseit's kind of like awkward and there's no good social cues or rules about liketalking about things like grief. She talks about howthere are certain people in her life who like don't know that she has a brother because talking about someone in your life who'spassed away and died like immediately brings down the mood foreveryone else, even though that's not really the point of it.But also she doesn't want like people in her life, especially like when she getsinto these like science and doctorate programs, shedoesn't want like everyone analyzing her and her mom and herbrother and stuff like that and sort of putting more on gifty thanwhat she's willing to have put on her. Even though there are other books outthere about like grief and grieving and stuff like that, it's those sort of likesmall quiet moments that really appeal to me a lot. These sort of likeinner conflicts that you feel when you are grieving someone, when you've lost someone that you don't ever externally vocalizei suppose or externally express but they happen. Those are the things thatare like really, really beautiful in this book. There's also a significant part ofthis book that is all about like faith and searching for faithand truth and god and all of that sort of stuff. Gifty herselfhas a basically like pentecostal, evangelical background to her.She was brought up in a church and stuff like that and she like believed in godwhen she was younger and then she basically stopped believing in god.

And now as an adult she's kind of in the middle. And you see her sort of grappling with that andyou can see she's basically like explaining abouther own faith journey in this book. And again, the way that i'm talking about it, it says this is a memoir and it's not but that'show like well crafted this book is. Anyways that's as tangent. But yeah, youbasically see gifty grappling with her own faithjourney, about how she is trying to reconcile thegod that she knew growing up and then believing that that god doesn't existanymore, and then now as an adult being slightly more open to theidea of having-- of there being a god out there. And also like sort of the conflict that comes into play like being a scientist and looking for truth and answers in science but also kind of recognizing that there are limits to science and also that some of it might just be a god thing, and kind of figuring out your own sort of balance in what you believe is true and not true and what you're willing to leave open aslike potentially true but there's no way for you to really know for sure. Because i feel like whether you have some sort of faith background or not orbelieve in god or not, you have to come to a point where you'regoing to recognize that there's a limit to how much you are going toknow in your lifetime and the answers that you're going to get.There's this really beautiful passage that i posted on my instagram. Ifyou follow me and you look at my instagram stories you may have seen mepost this. This is gifty talking about a biologyteacher that she had while she was in high schoolwho was a christian. So yeah,this book is full of paragraphs and sentences just like that. This book isbeautiful and it's thoughtful and i also just realized that i'm wearing my spaceshirt while talking about it which feels very poignant but i didn't do that on purpose. So yeah, i think that this is a bookworth reading. Again, it is not homegoing by any stretch but this book is beautiful. Like yaa gyasi can write a book.

And ifanything, like yaa gyasi feels to me like one of the writers who feels pretty close to being able to pick up themantle that toni morrison left behind. Not that anyone will ever compare totoni morrison. But based on these two books, she's definitely a contender forit. And i definitely feel like, again, this one is definitely her moreliterary book but that isn't again a bad or good thing or anything like that. It's just in and of itself its own thing which ifeel like is kind of amazing. Because for the mostpart most writers, when they release a book, you know what you're getting. But now with yaa gyasi, i feel like i won'tknow what her next book will be. But i am still 100% here forwhatever she writes. It's a book that i kind of want to reread and like annotatethis book and stuff like that because, again, there's just like really, reallybeautiful thoughts explored in here and a lot of really beautiful questions asked that i feel like i haven't experienced awhole lot of in literature. And maybe that's just on me.But yeah, it's really beautiful, really poignant, and abeautiful exploration of like grief and identity and things along those lines. So yeah, I loved it.It's great. So those are my quick thoughts on transcendent kingdom by yaagyasi. Feel free to leave a comment down below letting me know what your thoughtswere on it.