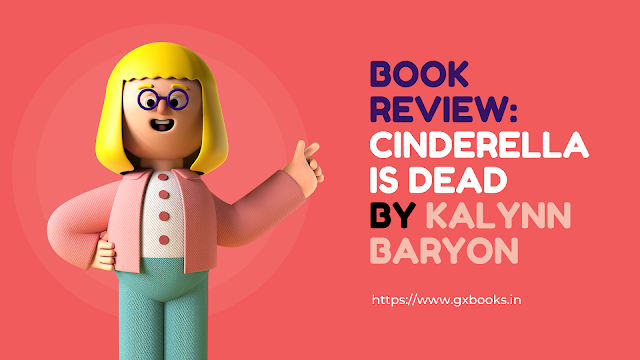 Book review on cinderella is dead by Kalynn baryon. right now I have my pillows behind my head so that it looks less like a blank wall. I don't know if that's better or worse. did you prefer the blank wall? let me know. so yeah, like the title, says, like I just said I'm doing a book review. this is a ya fantasy set in a world where Cinderella was real and her story is regarded as something akin to the bible.because of this every year teen girls are required to go to the annual ball where they're basically put on display so that the men in the kingdom can choose one of them to be their wives. if a girl is not chosen to be a wife then bad things can and will happen to them. so this book is set 200 years after the original cinderella story and we follow a girl named Sophia who would much rather marry her best friend Erin than any man.because of this when she goes to her first ball she ends up running away and she ends up meeting someone who reveals that there is more to cinderella's story. I'm going to give this story trigger warnings, content warnings for domestic abuse, homophobia, and sexism.as you can probably guess. there are maybe more trigger warnings. those are the ones I picked up on. I gave this three and a half stars.

I appreciated this as a fun romp with a serious message. this story is basically two sapphic girls bringing down the patriarchy so how could I not be here for that. and so i enjoyed the story even though I did find faults within the construction of the story. first, we have the world. i definitely could have used more world-building and development. the word this book is set in is horrifyingly patriarchal as the synopsis suggests but in general, i found it kind of to be generic. there's not a whole lot of descriptions and so it could really take place anywhere. I did like how the story brought in that even though the society favors it wasn't great for all men especially those who fit outside the norm and the story did definitely make the misogyny of the society that the main character lived in obvious. and some might say the discussions of feminism and feminist ideas might be too on the nose and there really isn't a lot of subtlety, but I didn't personally mind because I do keep it in the back of my head that this is ya so for a teenager reading this, this might be the first time they come across such ideas. hello, it's editing Lucie, here another day uh I actually already recorded an editing Lucie clip and then I didn't realize that the mic on my headphones is kind of shitty. so re-recording no mic hopefully this sounds better. I've been having so many microphone problems... anyway, that's not what we're here to talk about I just wanted to insert a clip to add something onto the world-building aspect of the book. as you can see by the cover this way...? yeah the main character is black which I appreciate. it seems like in this world everyone is some form of black or brown from what i could see and from what I remember everyone is described as some shade of black or brown. so it doesn't seem like any white people are.

I don't know if everyone in the entire world is because we do get some description-- not the description we do get some reference to other like kingdoms-- or not other kingdoms just like that there are other kingdoms but we don't really learn anything about them in this book. um, a lot of people who have read this book or I don't want to say a lot of people. I remember a couple Goodreads reviews referencing that the love interest for the main character reminds people of Merida because she has red hair and shoots a bow.the author has pointed out and I guess the book says, the author has pointed out that it seems like a lot of people are reading her as white and she's not. and the book does describe her as being fawn-colored which honestly when I read it did not mean anything tome. I did not imagine a skin color because I've never heard that before, but you know looking it up on youtube and like looking at foundation shades I guess-- not that I have to verify just wanted to know what was being referenced, that does, that would be a person that would be a shade that I would see as brown or black so there is that. and there are probably multiple conversations we could have about how people see certain traits and think what their other traits must be based on that, but then there's also an [conversation] about having black and brown main characters who are more "special" I guess because they don't have more common characteristics that are associated with black and brown people so yeah. I hope that made sense so just want to point that out.

I figured people would want to know so I'm going to go back to editing bye. for the writing and plot, the story definitely felt fast-paced which made it easy to read but along with the lack of world-building it just really felt like we rushed from plot point to plot point without much in between. and the plot felt a little almost too easy. the main characters really didn't have a whole lot of obstacles. I also did find the story to be pretty predictable for me. there was one plot twist at the end that did surprise me so that was good but basically, once you know the synopsis you kind of know how it ends. I did find the writing to be a bit simplistic but it didn't bother me in any way and I didn't think it was like badly written or anything. it just didn't have like super flowery language or writing in my opinion it just made it more easily readable. I also thought the cinderella retelling aspect of the story was interesting. I thought it did it in a like newer way and i appreciated how it kind of turned the Cinderella story. and I especially liked how the fairy godmother aspect of cinderella was incorporated into this story and I thought the use of that character was innovative and unexpected. as for the rest of the characters, the story is definitely more plot-focused than character-focused.so to me the characters did kind of feel underdeveloped but once again I had a good time reading it so I wasn't really paying attention to that. I didn't really notice until I had already finished it and was like thinking about my review.

like I said at the beginning of this review the two characters that we end up following are sapphic so that is always representation that I like to see in--especially fantasy, but just in books in general, and some might find that the main character and her love interest were loveys but I didn't personally mind. but to me, it felt believable how that relationship, their like love story kind of happened because of Sophia, the main character. also not to mention the other girl did save her life which can cause fast feelings to form. so I found their moments together to be cute. I enjoyed that aspect of the story overall. basically like I said there were some construction aspects of the story that weren't a huge fan of but overall I enjoyed the process of reading this and I enjoyed the overall story. what I'm about to say might sound contradictory but it's what I got. so if you want a fun and easy read about taking down the patriarchy then I would recommend it.