Don't Sweat the Small Stuff and It's All Small Stuff: Simple Ways to Keep the Little Things from Taking Over Your Life Book Review 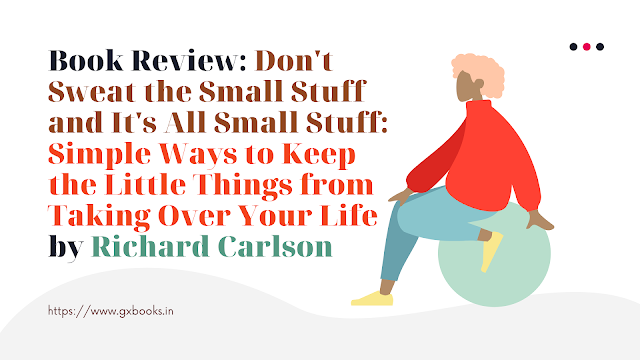 Don't Sweat the Small Stuff and It's All Small Stuff: Simple Ways to Keep the Little Things from Taking Over Your Life Book Review

Book reviews about self-help books and like those sort of type of books. The book that I'm going to be reviewing is a self-help book, and it's Don't Sweat the Small Stuff. It's all small Stuff: simple ways to keep the little things from taking over your life by Richard Carlson, and this is the second self-help book that I'm going to be talking about on my channel because I reviewed or I kind of did a book talkon You're Not Listening: What You're Missing and Why It Matters by KateMurphy, so I don't know - I don't really count that. I just happened to pick up this book, so I need help... but I'm like... I'm fine. I gavethis book two out of five stars. It was okay. This book was written in1999, so it's kind of old in book years, but it's relativelyyoung and just starting its life in humanyears. And so some of the Stuff I found didn't really stand the test of timewhich is kind of one of the reasons why I didn't read this book so high justbecause I feel like if you're writing a self-help book... Ifeel like the advice that you give should be applicable for along period of time which I'll kind of go into a little bit more later,so it was just an okay book. So, I'm gonna start with the things that I liked aboutthis book. So, one: I like that this book was pretty short. This bookis about 240 pages, but it's a very tiny book, and the text is very big,so I was able to read it in one night, and I think it's pretty good for anon-fiction book, especially a self-help bookbecause if your readers need help, they should be able to get it quickly.So yeah, I think one of the reasons also why I was able to read it so fast wasbecause of the way that it's formatted. It'sformatted in a very digestible way. It's divided into 100 littlechapters, and each chapter is a different point, or a way that you cankeep the little things from taking over your life.

And so some of the things thatI liked about this book was the actual content of this book and someof the points that the author made. I think because I read You're NotListening - that self-help book - a lot of the points kind of overlappedwith that book, and I think that's probably a common theme withother self-help books. A lot of self-help books probably reiterate the same things,and it's probably just because it's good advice, and in a way, I feel like a lot ofpeople already know what they need to implement in their lives to make theirlives easier for themselves, so I feel like the job of self-helpbooks is to try to take things that seem like commonsense and repackage and deliver those littlenuggets of truth to you in a way that makes you really think: Oh yeah, I should really implement this in my life. So for example,one of the things that he said was to... Smile at strangers, look into their eyesand say hello.

And so this point kind of follows this overarching theme thatto make yourself feel better, you should stop focusing on yourself so much andtry to focus on other people and be more concerned withhow other people are feeling. And another point that he made was: Understand the statement... wherever you go, there you are. And this kind of reminds me of my favorite quote which is wherever you goyou take yourself with you. And so this point kind of ties into thisother overarching theme of keeping perspective and knowing thatyour mindset and your attitude and the way that you perceive things areall things that are under your control, and so sometimes, getting out of a badsituation is all just a matter of getting out of a badmindset. And so yeah, it was just kind of things like that that Iliked about the book. I wanted to add that the book was kind of repetitive,and that can kind of work in its favor and also kind of work against it becauseon one hand, I found myself kind of skimming the book sometimes,but on the other hand, I can see how the repetitiveness of the bookcan help drive home certain themes that it was trying toget across. But the thing that I ultimately did not like about this bookwas that I felt like it was written with a certain target audience in mind,or that maybe it wasn't written with an audience in mind - it wasn't intended forany sort of specific people.

But it just feltlike a lot of the advice and tips that the author gavewere kind of coming from a place of privilegein a way because even just the title of the book: Don't Sweat the SmallStuff ~and it's all small stuff~. One of the themes of the book that I kind ofnoticed and was kind of repeated a lot was howto be happier and more content with your life there needsto be a certain level of detachment of yourself from peoplearound you and things that are happening around you. You should have kind of a whatever will be, will be attitude. And that's why I say that this book is kind of outdated,especially in this day and age where there's so much change happening rightnow. Another reason why I feel like this book was written with a certain audiencein mind, or maybe not in mind, but is written for acertain type of audience is because a lot of the examples that the author gaveto support his different points were examples that older people or peoplewith kids or people who live a certain lifestylewill be able to relate to... ...and people with a certain amount ofwealth will be able to relate to.

And so for that reason, the more uncommon sort of advice that he was trying to give wasn't able to really stick with me because I couldn't really get with andsee the point of view of the examples that he was giving,and it's not like I don't have empathy. It kind of ties in with my earlier point ofthat if you're writing a self-help book, I feel like self-help books kind of giveyou advice that is common sense and shouldbe delivering simple truths in very comprehensible ways,but I just feel like this book didn't always do that. I feel like it can't beapplied to everybody, so in that way I don't think it deservesa higher rating. Hey there, I'm just going to really comein here and try to clarify what I was saying becauseeven I don't really know what I was saying. So, I think what I was trying tosay is that your ability to find contentment in yourlife shouldn't come at the expense of others.The author used the phrase ~life isn't an emergency~ a lot, but it kind of made mewonder what type of background someone has to come from to see the truthin that saying. And when he said it's all small Stuff, I know he wasn't being literal, but some of the examples that he used to supporthis claims seemed to bend and shove big Stuff intothe category of small Stuff. So, I just wasn't always completelyconvinced by the different points he was trying to make, and I also just wasn'tcompletely convinced that all the different advice that he wasgiving was advice that can be generalized to a bigger population.

And Ithink one thing that I have to mention is that because this is a self-help book,I was kind of thinking: okay, what type of personis the type of person who would actually read a self-help book? And it's probablysomeone who is in a position to think about themselves and have suchinward thinking, and the type of person who isn'tstruggling in their day-to-day lives, I guess, just to survive. But also, I guessshows like Queer Eye exist to show you that you can always prioritizeyourself at any time, notwithstanding your current situation, So, I don't - I don't really know. I just feel like I'm talking in circles now.I think it was just the tone of the book. There's something about the tone thatwas off, and I can't exactly verbalize what it is. I don't know if that clarified what I wastrying to say or if it just made it more convoluted. So, I would recommendthis book if you're just looking for some quickself-help book to read because there definitely is a lot of good advice inthis book and common sense things that more peopleshould put into practice, but there's also just a lot of points that theauthor missed the mark on. I feel like there's probably a lot ofbetter self-help books out there, but that's just my opinion.