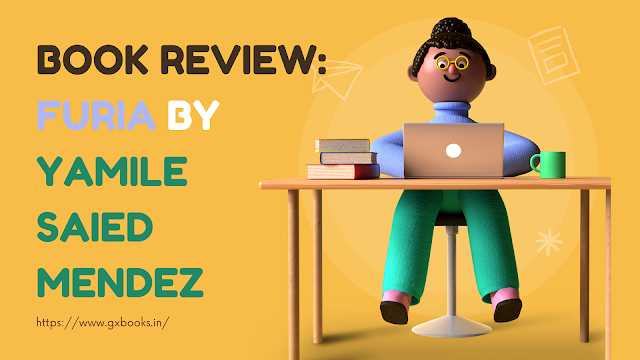 Today I'm going to be reviewing Furia by Yamile Saied Mendez. I'm reviewing this book as part of the Furiabook tour hosted by Colored Pages.  let's get started in Furia, we follow our main character Camilawho is keeping many secrets. One of these secrets is that she plays football. But since she lives in Argentina and has a very controlling and abusive father, she doesn't feel like she can freely spend her time playing football. Nevertheless, she keeps practicing with her team Eva Maria, and her team manages to land a spot in the South American tournament. As she juggles both football practice and her new job tutoring, she also has to deal with the fact that her childhood friend, Diego, who has now become a super famous football star, is back in town. And the two of them have unresolved emotions that they have to deal with. I rated this book 3.5 stars. I mostly really enjoyed it.

I thought there were a lot of good things going for it. So, let me talk about that. One of the things that I really enjoyed about this book was the relationship between Diego and Camila. The two of them had a very complex relationship. Although there were moments that were really really cute, there were also moments where you were frustrated with them. And I think the main reason why their relationship was frustrating at times was that they are both good people at the core of them. They're both trying their best, but they're not always succeeding at doing that. So, that leads to conflict. But it feels like very real conflict. It's not conflict that ever feels like one of them is behaving toxically towards the other. Like, not at all. I can totally see how a lot of the times what's happening is that the way that they were raised makes them think that they have to behave a certain way. So, for example, we have moments where Diegothinks that he has to "save" Camila, and Camila has to prove that, like, bro you don't have to save me. I can take care of myself. And he very much feels like he has to help her in some way and doesn't understand that the way to help her is to listen to what she needs not just impose what he thinks is the best solution to the problem. So, I really enjoyed that. I really did. I thought their relationship was interesting because of that. Apart from that, Diego was actually really really cute. Like, he had a lot of dialogue and scenes where I was just like, sweetie. You're so cute! So, really, I thought their relationship was fantastic.

I think another thing that this book did excellently was something that might be called the miscommunication trope, but I don't really it's the miscommunication trope. In this book, we have a lot of interactions that Camila has, especially with her mother, where they seem to be talking past each other. The two of them approach the conversation with the best of intentions. Sometimes even say really nice things or things that make the other person feel better, but then they kind of ruin it! At some point, there's friction. There's something that one of them says that upsets the other one. And I really appreciated having that dynamic because it is something that sometimes happens between people that they really do want to see the best in the other person, but they can't help that they're always finding that one thing they said that kind of stabs them right in the chest. So, it was frustrating. But...in a really really good way. So, we have Camila who is playing football but is trying to figure out what does it mean to want to play football and be fighting against those societal expectations while at the same time wanting a romance with this boy and really liking this boy.

And then we also have Camila's mom and dad who did what society expected them to do. They got married because they felt like they had to, and then they're both reacting very differently to the consequences of those actions because their marriage is not a healthy one. It's a very toxic relationship. And the two of them are kind of stuck in this marriage because they continue to think that they have to be. That they can't move out of it.That if they do, they're kind of failing everyone. So, in a lot of ways, this book is showing not only how society shapes you but also thinking about how it's your responsibility to try to become a better person. You can't stay stuck in those frames of thinking. I think if I have something "negative" to say about this book it would be that it tackles too many things. At least in my personal taste, I felt like it did not give enough depth to the different topics it was trying to handle. Because we had feminism, abusive relationships, football, romance, friendship, and all these were intricate but at the same time didn't feel like they reached their highest potential. So, that was kind of what was frustrating to me.

But I do think that ultimately it showed howCamila's life was complicated. It showed different parts of her life and how all of those played a role in how she behaved and how she...dealt with her life in general. So, though I would have preferred for this to have gone deeper, it wasn't surface-level only either. So, that's mostly what I have to say about this book. At the end of the day, I would highly encourage you to pick it up. I think there's a lot of merit to it. I think there's a lot of parts that are fun and engaging. And I think there will be something that you will take out of this reading experience if you pick up this book. So, go check it out. Anyway!